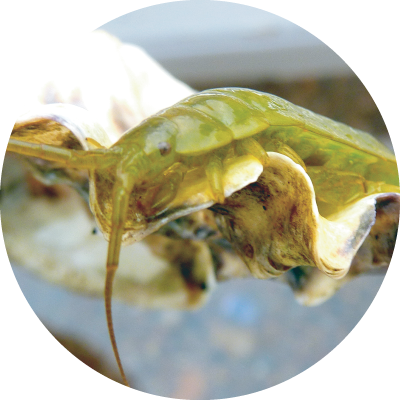 The isopod Idotea balthica is an ecosystem engineer which increases productivity of seagrass beds (Zostera) by reducing epiphytes, and a documented controlling influence on the macroalgae Fucus vesiculosus. As a food source in itself I. balthica is a major part of the diet of many fish species, including the commercially important Cod (Gadus morhua) and Perch (Perca fluviatilis). As such, I.balthica is a key species to fish stocks, fish biodiversity and maintaining the sublittoral zone in its current form. It is found throughout the Baltic Sea in association with Zostera and Fucus, down to salinities as low as 4 psu. Idotea balthica has dimorphic sexes and the brooded offspring have direct development with no planktonic stages.

Rationale for developing this model

Idotea balthica has a short generation times (ca 6 months) and is very easy to culture. The natural environment is easily reproduced in laboratory experiments and even field manipulations are possible. It is characterised by its high tolerance of low salinity, and as a brooding species I. balthica is an ideal marine model organism for evolutionary studies where phenotypic plasticity and response to selection can be estimated using common-garden and breeding experiments.